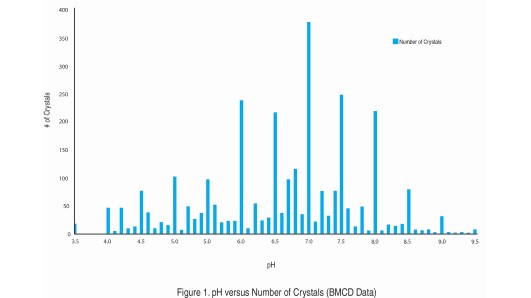 While evaluating pH as a crystallization variable, one should also consider the buffer. When reproducing and optimizing a condition, be sure to use the same buffer in the original screen producing the hit. If HEPES buffer was used, uses HEPES, do not at first, use HEPES sodium. The same is true for Tris and TRIS hydrochloride, Citric acid and Sodium citrate, and other buffer pairs. The measured conductivity of 1.0 M HEPES pH 7.5 is 13 mS/cm, whereas 1.0 M HEPES sodium pH 7.5 is 43 mS/cm. Different buffers require different volumes of the acid or base pair of the buffer, or HCl or NaOH to be titrated to a specific pH. This in turn can result in a reagent with a unique ionic strength. This subtle change in ionic strength can influence crystallization and can make the difference in being able to successfully reproduce a hit or not.

The buffer molecule itself can be a crystallization variable. 1.0 M Tris pH 7.5 has a measured conductivity of 43 mS/cm where 1.0 M HEPES pH 7.5 13 mS/cm. While this difference in ionic strength could be masked in a high salt condition, it might be significant in a low ionic strength polymer based condition. While it is important to at first use the same buffer used to produce the hit, evaluating a different buffer is something that should be considered during optimization. Until evaluated, one does not know if varying ionic strength will worsen or improve crystal quality. The unique chemical structure of different buffers effective over the same pH can also be a crystallization variable. The buffers Citrate, Malate, Succinate, Phosphate, Cacodylate, MES, Bis-Tris, and ADA are all appropriate buffers at pH 6. The unique chemical properties and structure of each of these buffers may influence crystal quality. Screen both pH and buffer type during optimization.

The ionizable amino acid side chains in proteins are aspartic and glutamic acid (pKa values of about 4.5), histidine (pKa = 6.02), cysteine (pKa = 8.2), lysine (pKa = 10.5), tyrosine (pKa = 10.2), and arginine (pKa = 12.2). Although the pKa of an ionizable group on a protein may be strongly influenced by its chemical environment, it is worth keeping these pKa values in mind, as it is in their immediate neighborhoods that the charges on a protein, their distribution and their electrostatic consequences may be most sensitive. Buffer pH can determine the ionization state of the side chains, and that can determine sample-sample and sample-solvent interactions, as well as lattice interactions, all having the potential to manipulate crystal quality.

Keep in mind the actual, measured pH of the crystallization reagent (condition, cocktail) may be different from that of the buffer stock used in formulation. This is okay, as long as one can reproduce the result. Most screen reagents are made from 0.5 or 1.0 M titrated buffer stocks, diluted to a final concentration of 0.1 M or lower. Dilution alone can change the pH, as well as the effect of additional chemicals, including salts, polymers, non-volatile organics, and additives. Unless otherwise indicated, or a Grid Screen kit which are titrated to pH after buffer and chemicals are added, the pH indicated on a tube label or formulation is that of a 1.0 M stock prior to the addition of other chemicals. Formulation details for screen buffer is available in Crystal Growth 101 – Buffer Formulation.

Protein Isoelectric Point as a Predictor for Increased Crystallization Screening Efficiency. K. A. Kantardjieff and B. Rupp. Bioinformatics 20(14): 2162-2168 (2004).

Distributions of pI vs pH provide strong prior information for the design of crystallization screening experiments. K. A. Kantardjieff, M. Jamshidian and B. Rupp. Bioinformatics 20(14): 2171-2174 (2004).